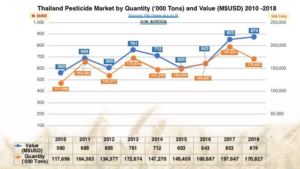 Thai National Hazardous Substance Committee postponed the ban of paraquat, chlorpyrifos from 1 December 2019 to 1 June 2020 and to restrict use of glyphosate to give time for replacement products to be found.

The ban began 7 October 2019 when the Deputy Minister of Agriculture and Cooperatives called a meeting of four working group committees from the Department of Agricultural, Importers, Farmers, and Consumers. The issues was the fate of three pesticides: paraquat, glyphosate, and chlorpyrifos. The import licenses have been suspended and the registrations have not been renewed for the products since 30 June 2019. 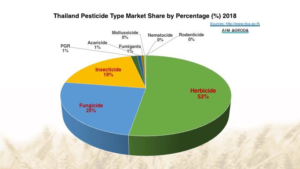 In addition to the ban the unanimous vote meant the three products could not be imported, or sold in the country. The vote also forbid the possession of these products. The Deputy Minister of Agriculture and Cooperatives said the vote was done as a New Year’s gift of Thai farmers.

The committee forwarded its decision first to Prime Minister and then to the 29 member National Hazardous Substances Committee (NHSC), which reviewed the issue on or around 27 October 2019. So far, the NHSC has only agreed to restrict use until it finds better alternatives, despite widespread calls for a total ban from health and consumer advocacy groups.

A Timeline of the Government’s Decision