North America Hampered by Weather, Trade, But Planted Area Set to Rise in 2021 Final figures released in July 2020 show that the global crop protection market in 2019 increased over 2018 at a rate of just 0.72% in nominal U.S. dollar terms to reach $55.65 billion; when measured at ex-company level and using average year exchange rates. While a positive result, it remains a disappointing one for a year that in January 2019 looked to be so promising.

Much of disappointment relates to the performance of the North American market. The impact of the spring floods in the U.S. Midwest illustrated the old adage of “when America sneezes, the world catches a cold” still held true in 2019; at least as far as the crop protection market was concerned. While the impact of the spring floods were felt in just the U.S., the relative importance of the U.S. at some 83% of the total North American market reduced any positive dilution effect of Canada.

While other factors were in play, including the then 9-month-old U.S.-China trade war, the direct impact of the spring floods reversed the trend of a small incremental sales value improvement seen since 2016 in the North American crop protection market as shown in Figure 1. 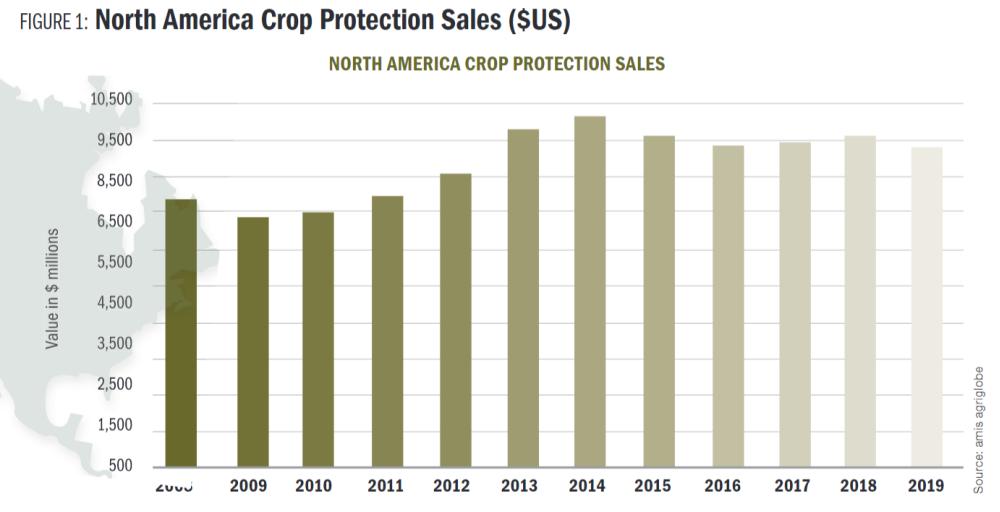 As a result, the North American market dropped -3.23% in 2019 to a level of just over $9.2 billion when measured at ex-company level. Again accepting that other factors were in play, this drop unexpected for the region before the spring floods and also not as the final 2019 figures played out for the rest of the world. Excluding the drop seen in the North American region the global market for crop protection would have increased about 1.6% in 2019. All other things being equal, this growth rate applied to the North American market and added back to the total would then have seen a global crop protection market of in excess of $56 billion in 2019. As an informal calculation, the spring floods can be considered therefore to have cost the industry in the region of $400 million from this one weather event. While $400 million is a significant amount (about the size of the Hungarian crop protection market) it needs also to be put into context with the estimate by the National Oceanic and

From the point of view of recent weather events, the U.S. 2019 spring floods have, however, had the most direct impact on the global crop protection market for a number of years. Severe weather events are not unusual, and in 2019 for instance, there was also significant flooded area in India, and then in June 2020 severe flooding occurred in many Southern provinces in China. In this 2020 weather event, flooding impacted some 5 million hectares of arable land with the direct overall economic cost estimated at $20 billion. As another example, the August 2020 Derecho again in the U.S. Midwest is estimated to have impacted on some 8.2 million acres of corn and 5.6 million acres of soybeans; the overall economic cost yet to be fully determined. Those events did not, however, impact as severely on the crop protection market as did the 2019 U.S. spring floods. In part this is due to timing — the spring floods occurring at the start of the season and the Derecho at the end of the season — but it is also in-part due to the intensity of the agricultural system itself and indeed its capacity to cope with extreme weather events. With COVID-19 having once again brought food sustainability and food security into the spotlight, such stress points need to be better understood.

Severe weather events have also been common in 2020 in the U.S.; the Derecho being one example. However, the trade war with China, the Market Facilitation Program and of course the numerous government fiscal responses to COVID-19 have all had more direct impact than climate. With the latest October WASDE report surprisingly lower ending stocks of commodity crops, and combined with acreage estimates, the response has been a significant increase in commodity prices of soybeans and corn. The bullish nature of the revised WASDE estimates might be too late to impact on the 2020 crop protection market but bodes well for 2021.

The revised October WASDE estimates followed by the NASS acreage estimates from 30 June indicated the total area of principal crops to be planted in 2020 as compared to 2019 was likely to increase by some 3% to about 312 million acres. This acreage growth has been one of the key drivers to increased crop protection use so far in 2020. Backing this up to a large extent are global results from the leading companies that indicate an improving picture so far for 2020 (Figure 2). 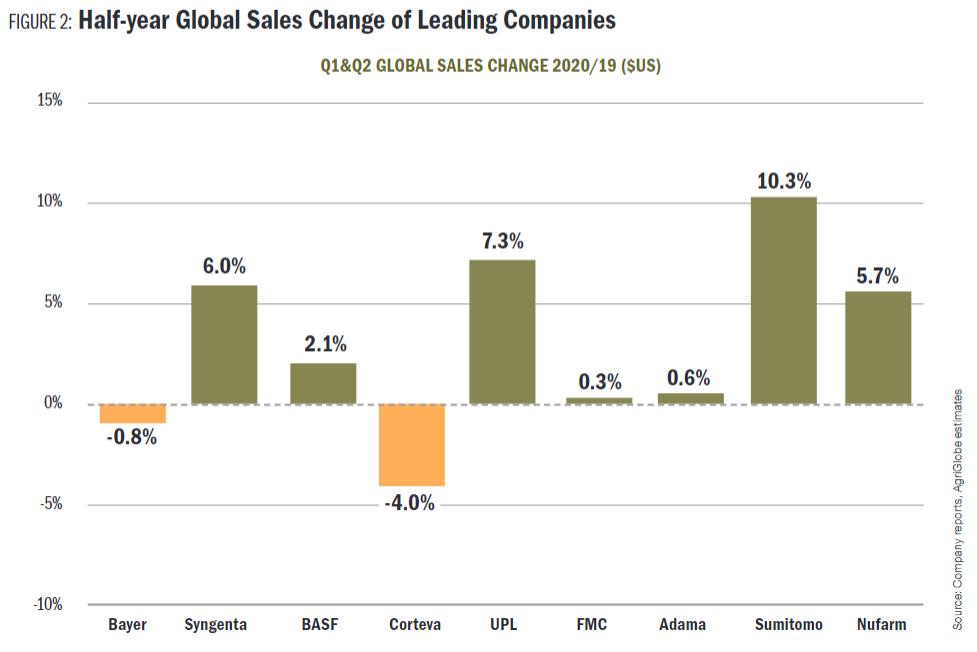 Note: Data is presented in nominal terms and expressed on a pro-forma basis (where possible). Expressed in EUR terms Bayer sales increased by +1.6% and BASF revenues increased by +4.7%. BASF CP sales estimated from Agricultural Solutions. UPL figures including Arysta sales (the merger was completed on 1-Feb-2019). Sumitomo Chemical CP sales estimated from Health & Crop Science sales. The Sumitomo Chemical sales in H1 include the acquisition of the South American Nufarm subsidiaries in April 2020 so are not directly comparable.

Providing the quantitative data in Figure 2 for the North American market in isolation is more challenging. Nevertheless BASF reported that Q1 2020 sales in North America improved considerably — especially for herbicides and fungicides — and that Q2 North American sales also saw some improvement. Syngenta likewise saw North American sales for the first half of 2020 increase 4% in U.S. dollar terms. With Bayer the situation was very similar in that half-year sales of the Crop Science Division (includes seed and traits) increased 4.9% in reported Euro terms. Corteva, on the other hand, noted sales for the region as down by 2% in reported U.S. dollar terms.

Sales of the multinationals and indeed the retail channel, Nutrien for example, are therefore on balance positive for the first half of 2020 as compared to 2019. Combine that with any tailwind economic and political stimuli in the 2nd half of 2020 in the run up to the U.S. election, then the outcome should remain positive for full year 2020. The outlook for 2021 is then to a large extent going to be influenced by the outcome of the November election in the U.S., which at the time of this writing was yet to be determined.

25 January 2021
Biomass image service to be integrated with xarvio FIELD...