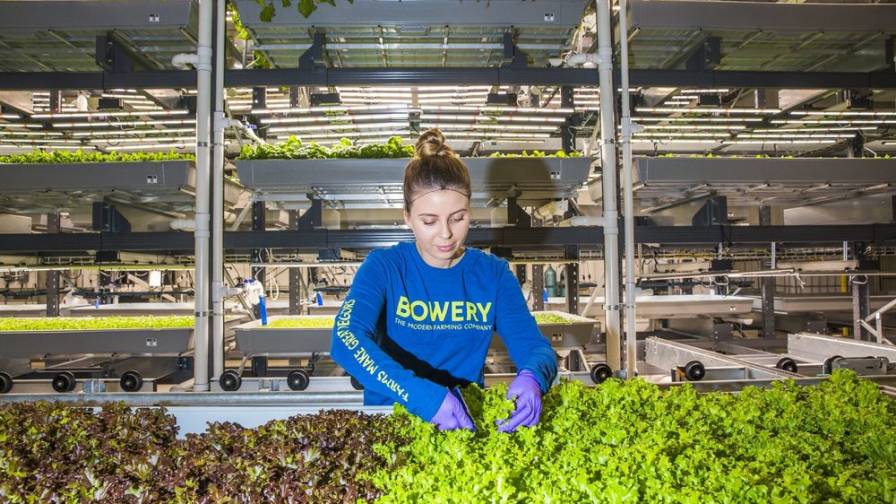 Vertical farms are part of recent advancements in agricultural production, commonly known as “agtech” in the investment community. As of late August 2021, $5.6 billion of venture capital has been invested in 6,000 startups in agtech. They are engaged in ag biotech, precision ag, animal ag, agri-finance, ecommerce, and, of course, indoor farming. In 2021, indoor farming deals are up 15.5% year-on-year and capital invested to date has reached $2.7 billion.

With the COVID-19 pandemic unabated at this point in time, many food-deficient countries are still looking for ways to address and ensure food security. During the worldwide lockdown from March to June 2020, supermarket shelves were half empty, and many people panicked. Disruptions in the supply chain due to the pandemic have put even more pressure on future food demands. This pressure is on top of ongoing climate change, competing land use issues, and population increase factors. Vertical and indoor farming are widely touted solutions. But is vertical farming commercially viable? Let’s examine the advantages, constraints, and how investments in vertical farming are likely to pan out in the foreseeable future.

Producing food in urban environments means being a lot closer to consumers, decreasing transportation from farmgate-to-dinnerplate, which helps reduce the carbon footprint.

Being able to produce food in land-scarce countries through such means will allow a degree of food insecurity to be addressed but not without a cost. Unfortunately, indoor and vertical farming is costly, resulting in a higher unit production cost compared to land-based farming, and someone has to pay for it. That someone is either the taxpayer, through government grants and subsidies, or consumers paying higher food prices. The irony is the food insecurity arising from a one-off pandemic is felt when there is no shortage of food in rich urban areas and countries otherwise, such as in Singapore and oil-rich Middle East.

An additional benefit is production and crop yield are not subject to weather conditions in such a controlled production environment. This means output is a lot more predictable and consistent.

For what is being produced now, which is mainly leafy greens, fewer pesticides can be used, which addresses, to some degree, consumer concerns on chemical tainted food or food safety. The reality is, less amounts of pesticides can be used, but the produce is not “pesticide-free” as claimed by almost all such indoor farming operations.

Vertical farming allows for a high degree of traceability arising from the use of artificial intelligence, automation, and blockchain technologies in a controlled environment. With food safety issues moving to the forefront and wider consumer awareness, traceability has become an important criterion to meet when supplying to more sophisticated retail outlets and consuming countries.

At the moment, mostly leafy greens are being produced despite many such vertical and indoor farming operations claiming that they can grow tens of varieties. Being able to grow them is one thing but growing them economically is another thing altogether.

Growing fruity vegetables and crops in such controlled and indoor environments will need specialized pollinators and equipment to disperse pollens, which are being invented. Newly developed techniques and cultured pollinating insects are being refined at the present time.

Besides, growing crops in an indoor environment entails using artificial lighting, which incurs a very high energy cost. The need for cooling due to heat generated by the lights adds to the energy cost.

Large-scale indoor farming of even a few acres attracts a high upfront set-up investment, and this is why the top three indoor farming operations, Bowery, Plenty, and AeroFarms, have raised over $500 million of investment funds each.

The most significant constraint of all is indeed the higher cost of production per pound or kilogram of fresh produce compared to traditional land-based farming as mentioned earlier. All current indoor and vertical farming operations are touting all the advantages, but none can claim that they also have a lower cost of production for every unit of output compared to those produced outdoors. Any indoor farming operation that can achieve this elusive goal of cost-competitiveness will most certainly attain unicorn status in the agtech investment space.

Given the tremendous amount of investment poured into this sector of agtech, the number of such farms will continue to grow worldwide. Relevant and useful technologies will continue to evolve and be improved. Collaborative efforts and opportunities between those having market traction with multiple farms and input and technology suppliers will be apparent and needed.

Better results will be ensured by suppliers and farm owners co-developing crop nutrition products to suit different crops, from the current leafy greens to fruits such as strawberries, and soon, to much higher-value medicinal plants such as medical cannabis.

New and innovative technologies that can boost yield significantly will, of course, help to lower the unit production cost. Such a technology could be misting the crops with carbon dioxide highly saturated in water, which is claimed to increase yield by up to 30%.

More eco-friendly products suited to pest and disease control in indoor growing environments will be needed, casting aside the unattainable mantra of being “pesticide-free.”

What does it take to compete effectively with land-based farming and be truly a solution to address food insecurity and meet future food demands in a sustainable way?

Having gone vertical to reduce space and land needed is not sufficient to offset the high cost of energy inherent in such farming operations. Heat accumulated in the growing environment and then having to cool down, as mentioned earlier, adds to the energy cost. So, it seems the next logical step would be to increase planting density further by not having any aisles, but this requires a higher degree of automation and ensuring there is a way to reach and treat any parts of the crop that are infested with pests and diseases.

Creating an environment free from pests and diseases will require clean rooms like ones used in pharmaceutical or semiconductor production. Such pest-free environments would incur even higher set-up and maintenance costs. In current operations, pests and diseases are inevitable as they can come through the ventilation systems and doorways, on top of accidental contamination by workers and through seeds. Bacterial and fungal spores as well as tiny pests such as mites can get through even the most well-maintained, controlled environment. Besides, circulating air as well as the humid growing conditions favor the spread of fungal spores and outbreak of mite infestations.

Effectively addressing these issues with agronomists, pest management consultants, suppliers of more eco-friendly pesticides, and engineering designers is more appropriate than simply touting being “pesticide-free” and sweeping the issues under the carpet.

Almost all large-scale indoor farming operations are claiming the employment of buzzword technologies such as IoT (Internet of Things) sensors, AI (artificial intelligence) image analysis, ML (machine learning), blockchain, big data analytics, automation, robotics, and conveyor culture platform. How many of them are indeed employing these in their operations is hard to determine but all these buzzwords sound impressive and are seemingly must-haves in their investment prospectus.

Indeed, going forward, those who have raised the hundreds of millions of dollars in investment funds will have all of these at their disposal and will hopefully help companies move towards attaining the ultimate unicorn status. Then, and only then, can they effectively address food insecurity and meet future food demands in a meaningful and sustainable way.