In mid-July, AgriBusiness Global sat down with Adam Litle, chief executive of Sound Agriculture, a San Francisco Bay Area startup that has made a name for itself by engineering a bio-inspired foliar spray which activates the soil microbes that fix nitrogen in the atmosphere and unlock phosphorus in the soil, effectively manufacturing fertilizer right at the root zone of a plant and reducing the need for nitrogen application by 25 to 50 lbs. per acre. Litle discussed how the recent surge of action around sustainability in the industry serves as a wakeup call, and how carbon programs are poised to help transform both the industry itself and the public perception of agriculture.

We last spoke in February – after Sound Agriculture announced a partnership with Syngenta aimed at cutting nitrogen use in China by 30%. Can you update us on your progress there, as well as your most recent deal with The Mosaic Co.? 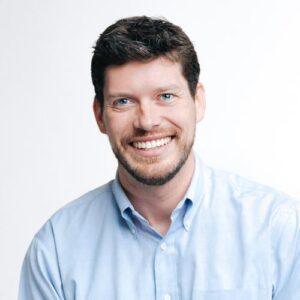 In China, it’s going well – it takes time to do the trials. We have our first season using Source on corn and wheat, and then we’ll see yield data this fall. From there we move toward regulatory developments. With Mosaic, we announced a co-development agreement to combine Source with micronutrients, which we think will make it more effective and easier for growers, as you can do two things at once in same pass. We have seen results, too, where you can get far more in terms of yield and nitrogen production to maintain yield. That is also being tested in the U.S., Argentina, and Brazil. Three different formulations are in play, but ideally it will be liquid as a foliar spray, given that is easiest for farmers.

The partnership is for multiple crops – we are starting to test in both corn and soybeans. The reason we can work in soybeans is because we aren’t just engineering a microbe that fixes nitrogen only. Our product stimulates both phosphorus solubilizers and nitrogen fixers that are native to the soil, so it is a broader response.

What major themes are you picking up on right now in the ag industry?

What you’re seeing is all of these large agribusinesses, in addition to startups like ourselves, move and have a real sense of urgency (around sustainability). For us, in addition to (our partnerships with) Syngenta and Mosaic we are talking to others for markets like Europe.

Our go-to-market team has doubled in the last six months, so we don’t have to wait to go country at a time to expand. I was at Corteva, and you see lots of conversations happening.

So, urgency has increased pretty dramatically in a short period time.

Big time. It has really hit a fever pitch in terms of, not just talk, but action. You’re seeing partnerships and announcements, and real money put forth into these (sustainability) efforts beyond just venture capital.

Was COVID ending a factor in the movement you’re seeing?

I think it was a related accelerant but not the core one. What COVID did for the ag system was it exposed how fragile it is – it’s incredibly efficient for a certain way of doing things but not very resilient when it comes to shocks to systems when it comes to supply chain. We already know that resiliency is tough when it comes to environmental issues, but now you also saw you can really hit supply chains and create food deserts. Luckily it wasn’t a huge issue in the States, but you can see if you get any of these shocks in the future combined – things like droughts and floods and inclement weather that most believe is coming from climate change – those can create a perfect storm that really hurts us as growers and consumers.

Europe announced on July 14 an ambitious plan to reach a carbon-neutral economy by 2050, under which it is aiming to cut emissions of greenhouse gases 55% by 2030 compared with 1990 levels. How much does policy abroad impact your decisions at Sound?

We believe that it’s just a matter of time that both governments and consumers at the global, national, and local level are going to put more action towards a series of carrots and sticks that will essentially lead to growers not just farming crops but farming carbon. I think that the concept of farmers actually farming carbon and sequestering it from the air and creating a public good that is arguably as important as corn or soybeans is really exciting, because it creates a whole additional opportunity and business model. It also really can help image-wise for those who, for better or worse, have this misconception of farmers damaging the environment. So, we have been excited to see that coming around and we think it’s going to ramp as climate issues become more painful to people all over. This is still early days.

Will the U.S. follow Europe’s lead – are we going down that same road?

I do. It’s a matter of time that essentially depends on politics. The Biden administration introduced a $3.5 trillion spending blueprint which includes a large amount of carbon incentives that are very similar to Europe’s plan.

Depending on politics, it will be slower or faster to happen, but if climate change continues to go in the direction that it is and everyone feels the pain from it, Americans move – and they move in an amazing way. It’s just a question of, if we are going to focus on prevention or, if we are going to wait, then it’s going to be expensive treatment down the line. I’d rather we focus on prevention and try things now as opposed to wait another five years, when we’ll solve it, but it’s going to be incredibly painful and expensive.

What approaches to sustainability do you think will be most effective?

The key is creating simplicity for growers and the system, because agriculture is changing faster than any time I have seen it, at least in my generation. Growers sometimes don’t know what’s real; they don’t know what works for them and their geography in particular. You don’t necessarily know how to put the steps together to become a carbon farmer and be part of the solution and to make some money off it, which they deserve.

Our approach is, instead of having additional equipment requirements and having more risk on the supply chain, you have a very simple liquid foliar spray that is compatible with pretty much any tank-mix. You just spray on corn or soybeans, and it activates the soil microbiome. In short, that ease and simplicity is something that we have as part of our values that we think is important in such a complex confusing space right now.

Carbon programs can certainly seem overwhelming and confusing for many, including outsiders like me, for sure.

It is confusing – there are different standards and competing for who is going to win out. You’ve got certain corporations that are paying for some things for carbon credits and not for others. The key is a turnkey solution. We are exploring a pilot soon to do exactly this, and actually get a group of farmers paid for using Source and producing nitrogen, in order to make that easier.

You’ve got to tie all these things together. We have a great core advisory board and we talk to them every week, and there is no end-all, be-all solution. Try a few things and be openminded, because it is going to take a couple seasons to see what work best.

The whole carbon movement and government action is going to come slow at first and like a freight train later on. If you just start when it becomes a mandate, then you’re not going to know what works and you’re going to take a big yield hit if they limit the fertilizer you can apply. If you try things for two or three years, then you will be way ahead of the ball and your business will be stronger for it.

How important do you think climate-related programs, compared with the increased adoption of biological products will be in transforming the perception of agriculture?

We refer to it as the nutrient efficiency space – that is really what is for the broader benefit of both climate change by reducing primarily nitrogen, which can be 300 times more potent than greenhouse gas when it volatilizes, as well as water quality, which is much more of a local issue. We think that the nutrient efficiency space is going to drive public perception, more action, and more motivation for the whole food system than pesticides over time.

Pesticides, and the anti-chemical movement that has come from a lot of urban consumers, is certainly not going to go away. Biopesticides will continue to push forward. But that’s more of health perception issue that really is less existential than if you are in California, like I am, and the forest fire season is coming a month sooner every single year. We can legitimately envision a future in five years or less, when the state is on fire for three, four, five months of the year. You have derecho every single year. That ends up being a much bigger problem, I think, than chemicals in agriculture.

It is also an opportunity – agriculture accounts for 25% of greenhouse gas emissions. So why not be the hero, when you can do that and solve a lot of problems by getting carbon in the soil staying there? That’s where products like biologicals and Source come in. There are solutions out there; it’s just that we need to try them more and increase visibility, because it’s not so dire. You just have got to get people out of their habits.

Can you describe how your product differs from the rest in its activity?

There are a lot of companies focused on adding more biologicals, more microbes to the soil. Another solution not talked about as much is to improve the efficacy of microbes already in the soil. We call these microbiome activators, of which Source is the leading product.

You should think about it in both ways. If you’ve got relatively healthy soils and you’ve got the right type of microbes as often farmers do, but you can increase the ability to fix nitrogen and sidedress phosphorus, you can start there with a simple foliar spray. If you also see efficacy from adding certain microbes, usually in furrow, then that can be added; they are complementary approaches.

For nutrient efficiency and climate change, it starts with the ability of the soil and the microbiome within the soil to nourish the plant instead of adding tons of chemical fertilizer. That’s the key.

21 September 2021
R&D and innovation will be prioritized over low-cost production...
Americas

The Covid Pivot: 10 Pressing Questions About the Future of U.S. Agriculture

Indian Government Must Strive for Sustainability While Ensuring Food Security

20 September 2021
The need for science-based policymaking is perhaps stronger at...
Industry News

17 September 2021
China, the world’s largest producer of glyphosate, has been...