The Andean Region: A ‘Developing Pantry’ for Global Agribusiness

Latin America comprises three regions dedicated to agricultural production with a very special focus on each of them. The first group are professional grain producers and exporters where Brazil, Argentina, Bolivia, and Paraguay are located mainly, focused on the production and export of soybeans, corn, and wheat.

The second group are professional fruit and vegetable exporters, with very intensive agriculture with high quality standards focused on food chain issues in small areas and organized to deliver high-value products. Special exports in Chile are dedicated to fresh fruits; Peru produces fruits and vegetables for export. Mexico is focused on fruits and vegetables; Central America and the Caribbean excel in the export of other types of products such as vegetables, fruits such as bananas; and coffee, sugar, and peanuts come from Nicaragua. From Colombia coffee, cut flowers, and fruits like banana, limes, and avocado are grown for export.

The third group is made up of countries that also have highly diversified, small-scale local agriculture such as Mexico, Central America, and the Andean countries. Traditional products for local consumption, for example potatoes, corn, and rice, mainly are produced in small areas with low levels of intensification and in some cases where machinery cannot be used.

This article focuses mainly on the Andean region and the countries that make it up, we talk about Colombia, Ecuador, Peru, and Venezuela. The population of the Andean region is around 130 million inhabitants, with Colombia accounting for 40% of the total, Peru for 25%, Venezuela for 22% and Ecuador for 14%.

*Estimates by an expert panel

In the last 20 years, the Andean region has been characterized by having a highly diversified agriculture with a great variety of crops, of which three groups of crops are available for both local and export supply.

In the first group we have agro-export crops that are intensive crops that require skilled labor and a well-founded technical direction. These crops are bananas, limes, grapes, avocados, citrus fruits, blueberries, peppers, asparagus, artichokes, mangoes, and onions, in addition to other types of fruit and vegetables.

Then we have those that are exportable organic, where we find in the case of Peru and Ecuador, coffee, cocoa, and quinoa, and other crops that we call traditional, such as corn, rice, potato, cane, beans, cotton, etc.

It is important to note that despite the fact that this region is characterized by being an area of ​​small-scale local agriculture with limited mechanization growing traditional crops for internal consumption such as potatoes, corn, and rice based on traditional agriculture, we also have a highly developed agriculture that produces both fruits and vegetables as well as coffee and other types of export crops such as fresh cut flowers from Colombia and Ecuador.

Agriculture in the Andean region has three very important components, especially what the large companies do, which make up the agro-industries that are intensive crops of great dedication, which have very strict requirements for export, for example avocado, grape, asparagus, blueberries, mandarin peppers, and cut flowers, among others.

The second group are medium-sized farmers who have extensive crops such as corn, rice, cane, beans, palm, cotton, and cocoa, in which they have a management of the crop is intensely directed by their owners, who make technical decisions and have technology adoption through influencers.

The third group is the largest group in the Andean region, are the small farmers. They are active in the mass market, and they have the crops of potato, coffee, carrot, bean, bean, pea, coffee, vegetables, and fruits in general. These farmers have family farming practically for their own consumption and sell their surpluses. The adoption of technology is very traditional and always oriented to the indications of the market movement.

The Andean region has approximately 8.3 million farmers where Colombia and Peru have a similar number with 2.7 million each, while Ecuador has 2 million and Venezuela with 1 million farmers.

The market for crop protection products is approximately $1.3 billion, of which Colombia has a 50% share with 630 million, followed by Peru with 24% of the total and about $307 million. In third place, Ecuador has $250 million and 20% participation in crop protection value, and finally Venezuela with $100 million and a participation of 7% of the total.

The commercialization of agrochemical products in the region is based mainly on the retail strategy, also known as the sale of goods to the public in relatively small quantities for use or consumption rather than for resale especially due to the land tenure where the vast majority of farmers are small farms. In the case of Colombia, the vast majority of farmers have less than three hectares on average, and in the case of Peru, 32% of farmers have less than half a hectare.

By 2019, the Andean region had a planted area of ​​11.3 million hectares, in which more than 100 different crops are planted. The main crop that this region has is corn with 1.6 million hectares, that is, 15% of the total area planted, then coffee follows with 1.5 million tasks, which is 12%; and in third place is the rice with 1.4 million hectares.

The cultivation of blueberries has had a very interesting development especially in the last five years with an annual growth of 85.9% in the area year after year, the same as ginger especially in Peru with significant growth of about 31% per year.

Avocado has one of the highest growth rates in the region of approximately 10% per year in the last 10 years, reaching 123,000 hectares with special development in Colombia with 63,000 hectares and Peru with 43,000.

The oil palm has also had solid growth of 7% per year, reaching 820,000 hectares in the region, with much of the growth in Colombia and Peru. Conversely, Ecuador has lost about 200,000 hectares of oil palm. 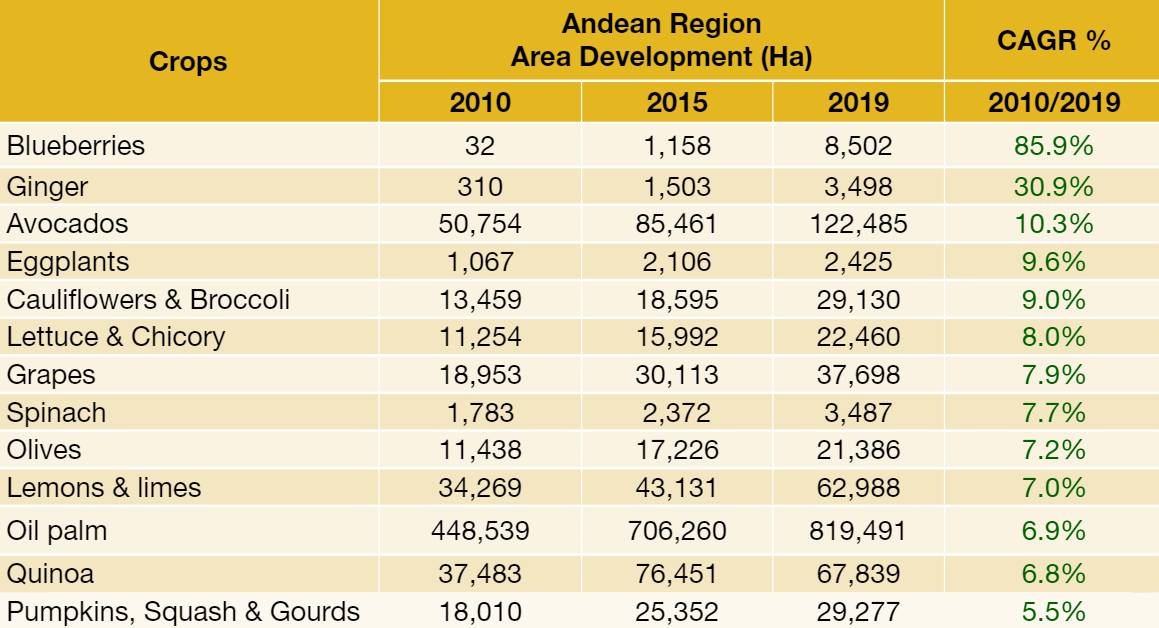 In the case of quinoa, Peru has made a very important development in terms of the area, reaching 68,000 hectares with a 7% annual growth. Other fruit trees, including lemons and limes, and grapes have also had positive growth of around 8%. There is a shrub that has been standing out especially in the last five years, which is the blueberry, for which the area has been growing in a positive way, especially in Colombia and Peru where developments are looking quite satisfactory.

The Andean region is consolidating as an important source of different agricultural products, not only for local consumption but also for export markets offering a great variety and broad amount of different products to attend the demand of important countries worldwide. For this and other reasons, the Andean Region becomes a developing pantry for global agribusiness.

Javier Chavarro is an experienced Agribusiness professional with broad involvement in Latin American agricultural business and deep knowledge of marketing, top management, financial management, and agronomy. He has a background in marketing and commercial development, focusing on the farming enterprises in Latin America working directly with countries and regions such as Colombia, Ecuador, Peru, Chile, Mexico, Central America, Argentina and Brazil. He has worked for multinational companies including Bayer and Nufarm with roles in business strategy development and implementation in Latin America. See all author stories here.