In the last outlook for the North American market in October 2020, the underlying sentiment was one of a rebound from the flood-hit 2019 campaign, even if that rebound was caveated with some caution. That caution revolved mainly around the impending U.S. elections at that time, ongoing concerns with the Chinese/U.S. trade deal, the Market Facilitation Program, and overall COVID-19 fiscal response, likely final net farm income, the full impact of the derecho, and the consistently reduced “ending stocks” of both corn and soybeans as reported by WASDE. Canada for its part was beset by ongoing trade issues with China such that the outlook for the final 2020 North American market at that time relied on some crystal ball gazing.

Many of last year’s unknowns have been resolved. The U.S.’s 2020 election result in favor of the Democrats is one clear outcome. China also stayed the course on its commitment to the Phase 1 Trade Agreement throughout 2020, with China buying from the U.S. a reported $27.3 billion of agricultural products, according to the Peterson Institute for International Economics. While this was a significant increase over 2019, those purchases only represented some 82% of China’s initial commitment to purchase $33.4 billion of agricultural products in 2020. Given challenges brought about by COVID-19 then, 82% of target should nonetheless be considered as a success story as it still allows the Biden administration to focus on the U.S./China relationship from a reported “position of strength” going forward.

The COVID-19 pandemic also threatened net farm income in 2020, although a late rally in commodity prices as well as additional federal payments (which generated close to 40% of that income) meant that final net farm income actually improved significantly to $121.2 billion in 2020. One additional uncertainty in October 2020 was the full impact of the August derecho, which is now considered to have impacted 850,000 acres of crops, about 50% more than originally estimated. That derecho impact along with then a significant uptick in demand from China in Q4 pushed commodity prices up significantly with prices for corn reaching a six-year high at close to $5 per bushel by December 2020 and with soybeans hitting over $10 a bushel the best since 2007.

Although the 2020 Kynetec End User panels have been finalized at the time of writing, the data has not been compiled at an ex-company level yet as those final calculations will not take place before June. However, with the publication of Syngenta’s 2020 results on March 31, company data is now available and comparable for all the multinationals as depicted in Figure 1. While Figure 1 presents global crop protection sales, most companies also report sales for North America, which can broadly be compared to each other. On that basis, Corteva reported +8% for the North American crop protection market, whereas FMC saw the opposite trend at -8%. Syngenta reported a positive +5%, whereas Bayer Crop Science, BASF Agricultural Solutions, and ADAMA all reported smaller negative growth rates for the region. On balance, the summation of the sales of the leading companies would indicate a flat to slightly positive outcome for the North American crop protection market in 2020, at least for the main companies.

While these mainly positive results indicate an ever improving picture for the final North American 2020 crop protection market, the outlook for 2021 is less robust. The USDA currently forecast that net farm income in 2021 will fall by some 8% year-on-year to $111.4 billion although remaining strong by historical standards. Crucially, however, it will be driven by high commodity prices rather than federal payments, which supported both 2019 and 2020 campaigns. Achieving those high commodity prices would then boost the 2021 crop protection market but that outcome is dependent upon several key factors and primarily the balance between demand and supply:

Demand: The latest WASDE report predicts that the season-average soybean price will reach $11.15/bu; wheat will reach an average of $5/bu, and corn will hold at an average of $4.3/bu. At such levels, all three commodities are approaching record highs. Much of the predicted improvement is, however, dependent upon demand — and in particular demand from China. The latest trade outlook figures from the USDA predict that China will purchase some $31.5 billion of agricultural goods from the U.S. in 2021, representing a significant 22% of the total exports of agricultural products from the country. 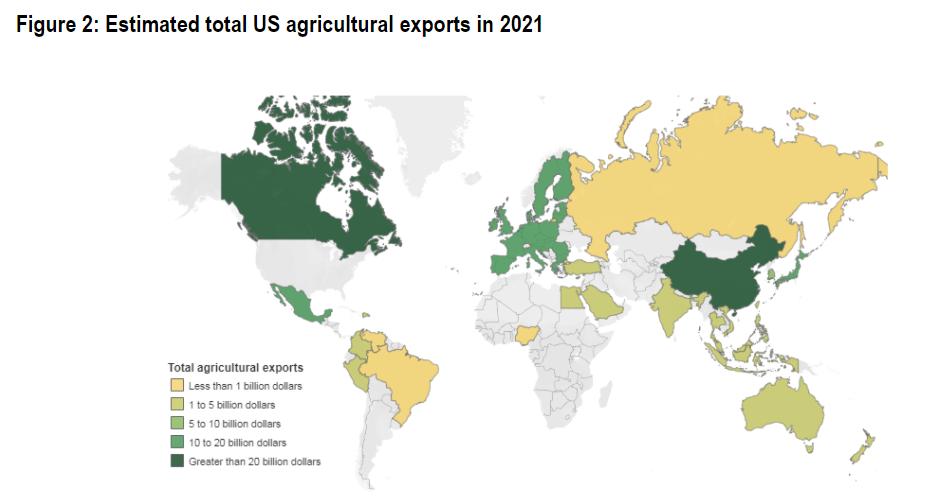 Aside from the USDA trade outlook of $31.5 billion, China is committed to buy some $40.4 billion in 2021 under the second year of the Phase 1 Trade Agreement. As in 2020, however, this figure of $40.4 billion is unlikely to be met in full. Indicative of that is that through to February 2021, exports at $5.8 billion have already fallen short of a target of $8.1 billion. While not a reason for concern yet, the ever-increasing occurrence of African Swine Fever (ASF) in the Chinese hog herd as well as the ongoing COVID-19 pandemic globally are all external factors that will challenge China’s ability to meet this obligation. U.S.-Sino relations are also, at the time of writing, under extreme pressure.

Supply: The infamous U.S. Midwest spring floods of 2019 reached their peak around mid-March that year, and while that historical date has just passed in 2021, the current La Niña phase of global weather still has the potential to disrupt planting intentions even in the Northern Hemisphere. Discounting severe weather complications, however, all indications are for a significant increase in the area planted across the U.S. for the main 2021 row crops.

In a normal year figures from the USDA Planting Intentions Survey released 31 March 2021 would be the benchmark reference point that will then go on to shape commodity prices for the next marketing year. The year 2021 is, however, no normal year, and while much emphasis has been placed on the planting estimates from the USDA 2021 Ag Outlook Forum held in mid-February, other estimates have since come out that suggest an even greater shift back into corn than first expected. Corn, despite prices not having rallied as much as soybeans, is considered by many growers as the safer option given crop rotation requirements, soil health considerations, strong export demand even after taking into account U.S.-Sino relations, and an improved outlook for corn-based biofuel. The USDA Planting Intentions Survey does not, however, reflect that with the overall corn area now predicted at less than 1% up on 2020 (Table 1).

Despite variations in estimates as shown in Table 1, it remains clear that growers will plant a far greater acreage in 2021 as compared to 2020, and any additional shift to corn away from soybeans will likely favor the crop protection market. On that basis, the market for crop protection products in North America can be expected to continue the improvement seen in 2020 out to 2022. 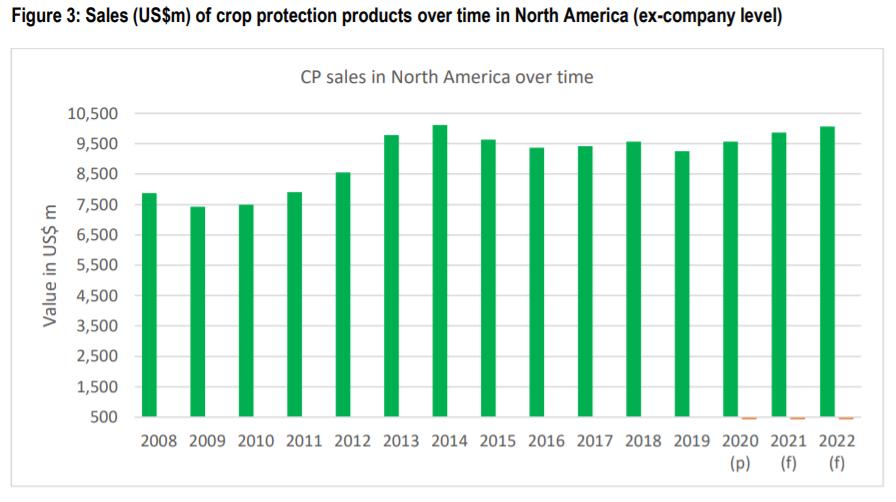 14 October 2021
No clear timeline for ‘normal production’ will continue to...