Global supply chains have seen significant disruption from the spread of COVID-19. For crop protection, it has interrupted production along the entire crop input value chain — from raw materials to manufacturing to packaging to distribution to transportation.

“In some cases, ships were ready but there were no truck drivers to bring the products to the ship,” says Felix Thuerwaechter, managing director of Jebagro GmH. “In other cases, there was a truck driver, but he wasn’t allowed to travel from one province in China to another because he was quarantined or travel was restricted, so the product didn’t move. In other cases, products could be formulated but then packaging materials didn’t arrive, so they couldn’t be packaged. Our office in Shanghai was shut down for four weeks.”

Thuerwaechter isn’t alone. The Institute of Supply Management (ISM) reports almost 75% of companies are experiencing supply chain disruptions. Further, more than 80% of companies believe their organizations will experience some level of impact because of COVID-19. Of those, one in six companies say they are adjusting revenue targets downward on average 5.6%. 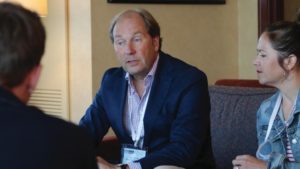 However, supply chain experts say the latest data is revealing some positives that show a turnaround on shipping is coming.

Virus Starts in the Shipping Hub

The global effects on supply chains begin in China.

China has become the manufacturing hub for the world, hence both domestic and international outbound shipments from China are critical to keep the world economy humming, explains Kumar Singh, head of analytics and product strategy at Jagah.AI, an India-based warehousing management company.

“So, it is not a surprise that at the peak of the epidemic in China, around the middle of February, shipping was the worst hit,” he says.

The scale of this crisis is unprecedented in modern times, adds Tinglong Dai, an operations management and business analytics expert from Johns Hopkins University Carey Business School. Approximately 80% of world goods trade by volume is carried by sea, according to the United Nations Conference on Trade and Development. Of the top nine container ports in the world, seven of them are in China; the other two are in Singapore and South Korea.

“All three countries were deeply hit by the coronavirus outbreak,” he says.

Shipping companies tried to mitigate losses immediately. In some cases, shippers cancelled ships or didn’t send them because there was nothing in them. In other cases, instead of shipping two half-full planes, only one plane was used to save on fuel costs, says.

Of all the shipping sectors, ocean shipping experienced the greatest impact. Under normal circumstances, shippers send approximately 200 container ships across the Pacific Ocean each month. Based on a Wall Street Journal report, containership operations canceled 110 shipments to North America within the first two months of 2020.

“At the peak of the epidemic in February, shipping volume — primarily ocean shipping volume — plummeted sharply,” Singh says. “Though the primary driver was the crippled industrial production, lack of logistics personnel at ports also added to the problem.”

Paris-based marine data provider Alphaliner reported that as of the end of February, a record 2 million containers of shipping capacity were idled, Singh says. “That is more than the 1.6 million, 20-foot equivalent units (TEUs-a standard industry measure of container capacity) sidelined after the collapse in 2016 of South Korea’s Hanjin Shipping Co. or the 1.5 billion TEUs of capacity idled in 2009 at the height of the financial crisis,” he says.

However, one bright spot to the timing of COVID-19 is that it started ramping up during Chinese New Year. During this holiday, businesses typically close for seven days. This year, businesses closed for three to four weeks at the end of January and into mid-February, Thuerwaechter says.

“We didn’t plan on any shipments at this time anyway because manufacturing shuts down, and then they extended the time off further because of the virus,” he explains. “If this happened four weeks earlier or later, then it would have had an even bigger impact on global shipping and the supply chain.”

As China starts to get a handle on the epidemic, the situation has already started to improve. Boston-based company CargoMetrics says cargo volumes and ship calls have swiftly rebounded as Chinese ports confirm the cogs of global trade are grinding back into motion.

“We’re seeing improvements across the board,” says CargoMetrics CEO Scott Borgerson. “We’re seeing a complete rebound in every segment — it’s all back. We don’t project our views onto the data. We let the data talk to us. And what the data is saying is, ‘Keep calm and carry on.’ Supply chains have reverted back to the mean. Things are moving.”

Larger shipping companies may have an easier time rebounding than their smaller counterparts.

But “smaller companies that depend more fully on business with China have little room to hide,” he says. “Those companies may have only a handful of ships, but they make up a critical piece of the global trade. They shuttle containers and commodities on regional trade lanes in the shadows of the big routes.”

Thuerwaechter, who as of press time said he was shipping 15 containers from Shanghai to Europe, says the situation is beginning to normalize, but is not near 100%. Shipping delays are between two and four weeks right now, he estimates.

“Many major shipping companies expect that once the epidemic starts winding down in China, which it looks like is already happening, they expect a weak recovery in March and a sharp rebound in April,” Kumar adds. “I believe that things will get close to normal around mid-April for shipping companies.”

How Do Shippers Cope?

Assuming the sharp shipping rebound happens in mid-April, other challenges will soon follow.

Shipping prices are expected to escalate. Thuerwaechter says shipping prices are already up 4% to 6%, and in some cases even as high as 5% to 10%. Location is a big factor in the variance. “European companies are increasing prices because they believe there will be a shortage,” he says. “And China has plenty of product, so they are actually starting to lower prices to move product.”

Amplification of prices is inevitable, Kumar says, adding: “After all, this will be an opportunity for many shippers to recoup their losses.”

So how do shipping companies cope? An important buzzword in supply chain management has been resilience, says Goker Aydin, an expert in operations management and business analytics from the Johns Hopkins University’s Carey Business School.

While this situation is not something one could fully anticipate or plan for, “a resilient supply chain must be able to detect early warning signs of a disruption and it must respond by shifting production to alternative sources,” Aydin says. “It must have either a diversified supply base or some contingency plan to utilize backup suppliers.”

But for a business to detect that a disruption is on the horizon, it must have a good handle on what its supply chain looks like. “It’s not enough to know your suppliers; you must also know who your supplier’s suppliers are, and so on,” Aydin points out. “Without that kind of detailed map of the supply chain, it is difficult to know the variable links.”

Nicole Wisniewski is a freelance writer/editor with more than 20 years of experience based in Cleveland. She is an award-winning business journalist and has extensive experience in green industries, including nursery, landscape, golf, and sports fields. See all author stories here.

USDA: Continued Progress on Implementation of U.S.-China Phase One Agreement

29 March 2020
Steps show that China is moving in the right...
Americas

Top 10 U.S. Ag Retailers With the Most Grain Elevator Revenue

29 March 2020
Manufacturing of fertilizers, pesticides, and seed are included in...